Across the industry, virtually all companies use conventional diesel-driven 3.5 tonne utility vehicles. Increasingly however, they are also testing alternative drive technologies, These include motorised delivery vehicles using electric or natural gas engines. On the other hand, parcels are also being delivered using pure muscle power by cargo bike. As a corporate group of companies, Hermes is looking to invest climate-friendly, low-emission/zero-emission technologies and alternative drives. Since 2017, we have been pooling such efforts for Hermes Germany in our Urban Blue programme.

A key approach to reducing emissions lies in optimising and modernising our fleet both in the final mile and on upstream line hauls.

Hermes has already been actively committed to using alternative drive systems since the early 1990s. As part of its pilot projects on electromobility, Hermes is currently deploying the following vehicles:

Overall, the framework conditions for the use of electric vehicles remain difficult – even in pilot operation. For example, there are hardly any passable production vehicles and there is also no adequate infrastructure at charging stations.

Selection of current projects on electromobility in the reporting period

Hermes is currently testing the deployment of different electronic-powered vehicles with various partners both in the final mile and on line haul routes. 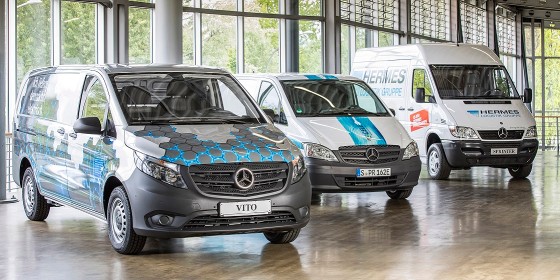 Signing an agreement on a strategic partnership with Mercedes-Benz vans was an important milestone on Hermes' path towards achieving zero emissions in Germany's 80 largest cities by 2025. Hermes is looking to build up its use of Mercedes-Benz electro-vans in its parcel deliveries to 1,500. The project started with a pilot phase in Stuttgart and Hamburg at the end of 2017. By the end of 2018, around 50 electric vehicles - some of them pre-production vehicles - will be tested in real operation 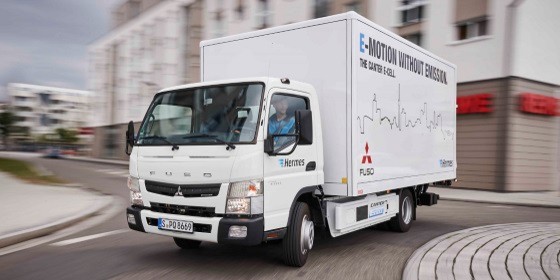 In Stuttgart, Hermes Germany deployed the largest electro-vehicle in its fleet for a whole year – from April 2016 to April 2017: a Fuso Canter E-Cell from Daimler, putting it to the test over 27,000 km. The vehicle can cover 100 km on a single charge while carrying up to three tonnes. 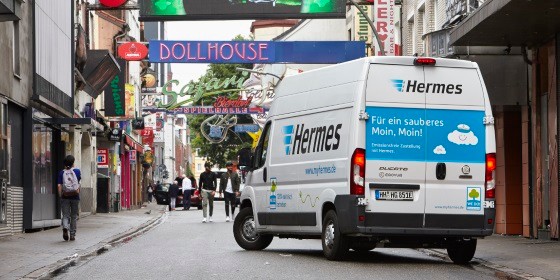 In June 2017, Hermes Germany began using battery-powered transporters to deliver parcels in Hamburg. Overall, six vehicles manufactured by e-mobility specialists emovum are being deployed in the city, each of which have a range of up to 120 km. 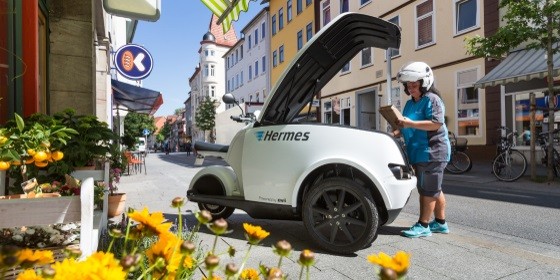 In 2017, Hermes Germany tested parcel deliveries the use of the Tripl e-vehicle in Göttingen. The completely electric-powered three-wheeler from Danish producers TRIPL is used to deliver to customers' homes in the inner-city area where there are access restrictions for conventional vehicles. 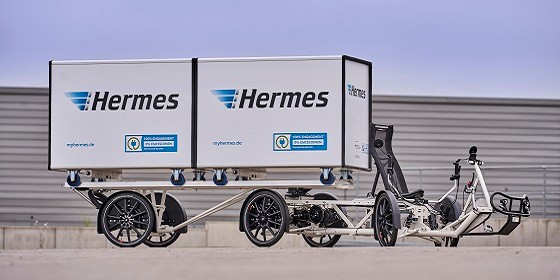 Hermes and other parcel service providers launched a joint pilot test with cargo bikes and microdepots in Berlin in June 2018. As part of a one-year field trial called ‘KoMoDo’ (Cooperative use of micro-depots by the courier, express and parcel industry for the sustainable use of load wheels in Berlin), the aim is to run operational tests on how cargo bikes can be used efficiently in parcel delivery.